Warner Bros. De Lane Lea was delighted to be involved in The Media Production and Technology Show on Thursday 12th May where Chris Burdon, Re-Recording Mixer, spoke in the Keynote Feel The Need, the Need for Sound, in conversation with Ben Nemes, Industry Consultant & Founder at Space Crate.

Chris spoke about his career, the changes in the UK post production industry in the past 20 years and his recent work on the upcoming release of Top Gun: Maverick.

“Working on Top Gun: Maverick there was a mixture of excitement and pressure. The expectations are higher on a sequel. The aim is to make the sound work so the audience feel like they’re sitting in on the action.” 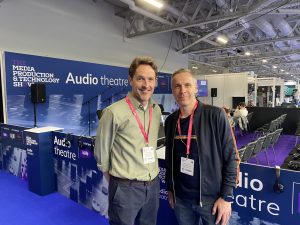